Police Officer Who Had Arrested Bootleggers Murdered in 1914 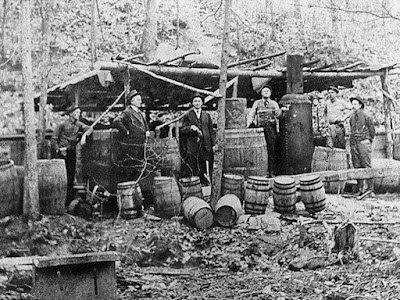 Police officer Robert T. Thurman was murdered just after midnight on September 18, 1914 on West Main street in Glasgow, Kentucky, about a half block from the Courthouse Square. Parties were reportedly drunk and disorderly and Thurman had received a telephone message to go to North Glasgow and make an arrest. He was returning with two prisoners when he fell to the ground after being shot just below his heart. Before making their escape, the two prisoners were seen kicking and cursing Thurman as he lay on the ground. The shots aroused citizens, who found the officer and carried him to the Murrell Hotel, where he died a few minutes later.

Nothing in the history of Glasgow had so aroused the people as the murder of Robert Thurman. The 37-year-old former marshall of Burkesville and Edmonton, Kentucky had killed two or three men, but was always acquitted on the grounds of self-defense. He had shot and killed Bud McCandless in Edmonton, who had killed Judge George H. Pierce, one of the prominent men of Metcalfe county.

More than one year earlier, bootlegging had. become so open in Glasgow that something drastic had to be done. The City Council hired Thurman with the understanding that he would try to arrest every violator of the law. Within a few weeks he had arrested 25 bootleggers, which naturally made him many enemies. He was offered large sums of money to leave, but had refused to. Threats of killing him were frequently heard, but Thurman, described as a man without fear, had paid no attention them. A few months prior to his murder, an attempt to assassinate him had failed because Thurman did not fall for a trap that had been set.

During the inquiry, there was sufficient evidence to suppory the arrest of Milton Mansfield, a young man well-known around town, and Louie Pace, a printer in the Glasgow Times office. According to the online "Officer Down Memorial Page," both men were convicted and sentenced to life in prison.

Thurman, a widower and father two children, was to have been re-married in a few days. Two thousand people attended the viewing at Jewell’s undertaking establishment. As a matter of fact, the crowd became so great that it became necessary to close the doors. There was equally as large a crowd at the funeral the next day. The most tragic affair ever to occur in Glasgow up to that point had profoundly moved the community.

Thurman, who was born in Clinton County, Kentucky on April 4, 1879, was buried on September 22, 1914 at Thurman Cemetery on Malone Ridge in Clinton County. He was the son of Turner and Elizabeth "Betsy" Riddle Thurman.