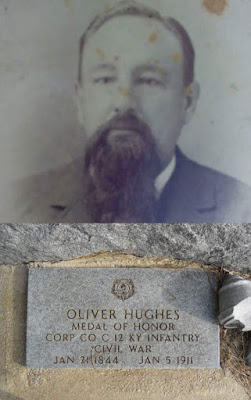 Harry Truman once declared he’d rather have a Medal of Honor than be president. The area i live in is blessed to have had three Medal of Honor recipients so far: Sgt. Alvin C. York during WWI, Lt. Murl Conner during WWII and Cpl. Oliver Hughes during the Civil War.

Most people may not know about the heroics of Cpl. Hughes. The first soldier from this area to receive the citation, he was born in Fentress County, TN in 1844 and lived in the Static area, close to where Conner lived and not far from York's place at Pall Mall, TN. Cpl. Hughes was awarded the Medal of Honor for an act of extraordinary heroism which he performed on February 20, 1865, while serving with the Union army's 12th Kentucky Infantry at Town Creek, North Carolina.

The Union army had came up on Confederate lines along the road from Wilmington to Fort Fisher. Finding themselves in a comparatively open country with only a few pine trees, the federal troops were exposed to a merciless fire from the rebel artillery. Seeing that desperate measures were necessary, Lieutenant-Colonel L.H. Rassieur ordered an attack on the rebel lines. When it began, Cpl. Hughes saw the color-sergeant carrying the flag of the 11th South Carolina Infantry Regiment. The flag, in those days, was used to signal advances and retreats. Determined to capture it, he made a rush toward the color-sergeant, who retreated to within a short distance of his company. Still, Hughes persisted and within 3 feet of the mouth of one of their cannon, killed him and captured the colors. In the disray, the union was able to counter because with the Confederate flag gone so were the communications it provided.

Cpl. Hughes saved thousands of lives that day Town Creek, North Carolina. After the war, he returned home to farm, but a few years later moved to Macon County, Missouri. He died there in 1911 at the age of 69.