A Eulogy for Billy Graham 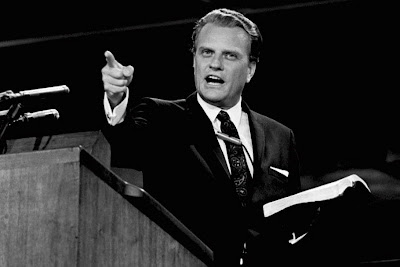 A private (invitation only) funeral service for the Rev. Billy Graham will be held today at noon in a tent outside the Billy Graham Library in Charlotte, North Carolina. Graham died Feb. 21st at his home in Montreat. He was 99. He will be buried next to his wife Ruth, at the Billy Graham Library Prayer Garden. She was buried there on June 17, 2007. The tent is symbolic of the "canvas cathedral" in which Graham conducted his 1949 Los Angeles Crusade that lasted eight weeks and propelled him to national prominence.

Following the private interment service, Graham's grave marker will be put in place. The marker is made of North Carolina stone. Written on it is a scripture reference to John 14:6, a bible verse he used regularly throughout his ministry.

"Jesus saith unto him, I am the way, the truth, and the life: no man cometh unto the Father, but by me."

Billy Graham's casket was designed and built by inmates at the nation's largest maximum security prison, Louisiana State Penitentiary in Angola, Louisiana. While touring the correctional facility after preaching there in 2005, Graham's son Franklin saw caskets being built. Inmates at Angola make caskets for other inmates who cannot afford to purchase one. Moved by this, the younger Graham requested that inmates make caskets for his mother and father. The casket s made of pine and lined with a mattress pad. A wooden cross is nailed to the top of the casket. Ruth Graham's casket is identical to this one.

Graham conducted more than 400 Crusades on six continents beginning in 1947, taking the Gospel to some 215 million people in more than 185 countries. Hundreds of millions more have been reached through television, video, film and webcasts. Twice, during Crusades in Seoul, South Korea, Graham preached to crowds of more than one million people. In the United States, Graham preached in 45 states (plus Washington, D.C.) and more than 125 U.S. cities. More than 3.2 million people have responded to the invitation at Billy Graham Crusades. Millions more have done so as a result of broadcast outreaches.

Born Nov. 7, 1918, four days before the armistice ended World War I, William Franklin "Billy" Graham Jr. grew up during the Depression and developed a work ethic that would carry him through decades of ministry on six continents. He was raised on a dairy farm in Charlotte. Back then, "Billy Frank," as he was called, preferred baseball to religion. "I detested going to church," he said when recalling his youth.

But in 1934, that changed. At a revival led by traveling evangelist Mordecai Fowler Ham, 15-year-old Graham committed his life to serving Jesus Christ. No one was more surprised than Graham himself. "I was opposed to evangelism," he said. "But finally, I was persuaded by a friend [to go to a meeting]...and the spirit of God began to speak to me as I went back night after night. One night, when the invitation was given to accept Jesus, I just said, 'Lord, I'm going.' I knew I was headed in a new direction."

Several years later, Graham's "new direction" led him to the Florida Bible Institute (now Trinity College of Florida), and later, Wheaton College in suburban Chicago, where he met fellow student Ruth McCue Bell, the daughter of medical missionaries in China. The couple graduated and married in the summer of 1943. Mr. and Mrs. Graham and their five children made their home in the mountains of North Carolina. They were married 64 years before Ruth's death in 2007.

After two years of traveling as a speaker for the Youth for Christ organization, Billy Graham held his first official evangelistic Crusade Sept. 13 – 21, 1947 in the Civic Auditorium in Grand Rapids, Michigan, when Graham was 29 years old. It was attended by 6,000 people. But, it was his 1949 Los Angeles Crusade that first captured the nation's attention. Originally scheduled to run for three weeks, the "tent meetings" were extended for a total of eight weeks as hundreds of thousands of men, women and children gathered to hear Graham's messages.

"I have one message: that Jesus Christ came, he died on a cross, he rose again, and he asked us to repent of our sins and receive him by faith as Lord and Savior, and if we do, we have forgiveness of all of our sins," said Graham at his final Crusade at New York's Flushing Meadows Corona Park, June 24 – 26, 2005 when Graham was 86 years old. More than 230,000 people attended.

According to a 2005 Gallup Poll, 35 million Americans—one in six adults—had heard Billy Graham preach in person. He was regularly listed by the Gallup organization as one of the "Ten Most Admired Men in the World." In 1983, he received the Presidential Medal of Freedom from President Reagan —the highest honor the president can bestow on a private citizen. In 1996, U.S. lawmakers awarded Graham and his wife, Ruth, the Congressional Gold Medal — the highest honor Congress can bestow on a private citizen.

In addition to his crusades, Graham provided counsel to 12 sitting U.S. presidents, beginning with Harry S. Truman. I was at Neyland Stadium in Knoxville on the night of May 28, 1970, when Richard Nixon spoke at a Billy Graham Crusade. I wrote about it in "Nixon's Night Out."