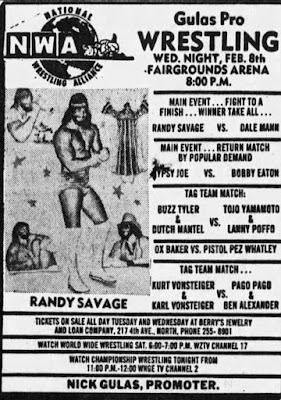 The date was February 8, 1978. Gulas Pro Wrestling and the National Wrestling Association featured Randy "Macho Man" Savage versus Dale "TNT" Mann in one of two main events at Fairgrounds Arena in Nashville. It was the third match between the two popular wrestlers in eight days.

The match was billed as a "Winner Take All, Fight to a Finish!" Also on the same card, Tojo Yammoto and Leaping Lanny Poffo were featured in one tag team match and in another, Kurt and Karl Von Steiger, who at one point in their careers were known as The Germans. They were managed by my friend, Wendell Burchett (or Bur'chette, as he was billed). For all of you wrestling trivia fans, Wendell wore an army helmet and used it as a weapon of distraction during matches, although more times than not, as he once related to me, the helmet was grabbed by an opponent and used on him.

Another piece of wrestling trivia, for a time, before Savage ascended to the throne at the WWE in Samford, Connecticut, the Poffo family wrestled regularly throughout Kentucky. Most always, the ring they used was provided by Dale Mann.