"The Cause For Which We Stand" 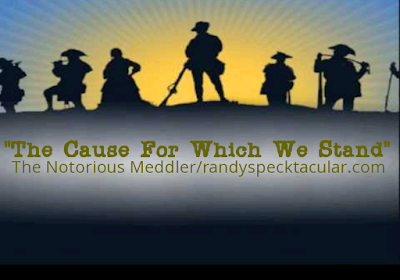 I often write stories about the Civil War. I love the history behind it all, especially the local history from Wayne County down to Overton County and all points in between. There is much to be learned about the Civil War here in our own backyards. Like all of you, several of my ancestors fought in the war, and like many, I had family on both sides, and in the weirdest corners, too.

My 3rd great uncle was the notorious guerrilla Tinker Dave Beaty, who fought strongly for the Union cause. My 2nd and 3rd great-grandfathers, George and John Boles, were part of his Independent Scouts. On the other side, My 4th cousin, Fountain Frost, rode with Beaty's arch nemesis, the notorious Confederate guerrilla, Champ Ferguson, who fought just as strongly for states rights and 'the southern way of life.' My dad's side of the family in Overton County was mostly aligned to the Confederacy. My mom's side of the family in Fentress and Wayne counties were mostly aligned with Abe Lincoln, who felt it was his sacred duty as President to preserve the Union at all costs.

Very ironically, George Boles, although not yet officially my 2nd great-grandfather at the time, is believed to have killed Frost in a skirmish near Gilreath's Mill, not too far from Holbert Creek, and halfway between Chanute in Pickett County and Pall Mall in Fentress County, Tennessee.

It was sort of like that in the American Revolution, family on both sides, except...it was the same guy.

We all know the story of Benedict Arnold, the American soldier who switched sides and fought for the British during the Revolutionary War. But, have you met Ed Wade? He was 8th great-grandfather born on my dad's maternal side. To be exact, he was Edward C. Wade, Sr., born in York County, Virginia on April 21, 1727, and whose father, Colonel Robert Wade had fought in the French and Indian War. Yeah, that guy.

Edward was a Captain in the British Army at the beginning of the American Revolution, but in 1777, he and one of his brothers, so the story goes, decided to switch sides and join the Virginia Militia. It was a strong commitment to freedom for the Wade family, because two of Edward's sons, Richard and James, were killed while serving with the 6th Virginia Continental Line in 1776. After the war, Edward migrated to Georgia. He died on Nov. 4, 1790 and is buried at Little Creek Church Cemetery in Greshamville.

Switching sides was perhaps by conviction, perhaps it was because of personal belief, or perhaps it was to align oneself with their friends and families. Perhaps it was about wanting to please God. Each side believed God was on their side, but both prayed to the same God and read from the same Bible. So, whose side was the Lord on? During the Civil War, President Lincoln suggested neither side could claim God’s special favor. “The Almighty has His own purposes,” he said. It wasn't 'whose side is the Lord on,' but rather, 'who is on the Lord's side.'

An interesting side note locally: Edward Wade's second cousin, Richard Wade, left Virginia in 1777, the year Edward's father died, and moved to Boonesboro, Ky to help Daniel Boone defend the frontier. In 1801, he moved his family to a part of Wayne County that later became Clinton County. Richard is buried at Cartwright Cemetery. Also after the war, Edward's first cousin, Elizabeth and her husband, Samuel Denney, migrated to Wayne County and they lived on Beaver Creek.