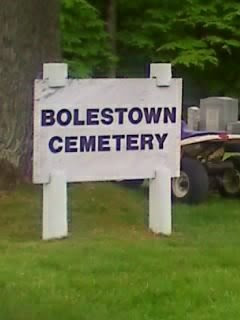 We visited Bolestown Cemetery over the weekend.

He was a member of Tinker Dave Beaty's Independent Scouts.

She was Tinker Dave's sister.


Before the war, John served for six years in the Tennessee State Legislature. He was elected state representative in 1850, and then State Senate in 1852. After the Civil War, John was the sheriff of Overton County until his death in 1869.

I suppose I am related to just about every single person buried at Bolestown Cemetery. I was glad I got the chance to visit there. Bolestown Cemetery is located in a remote cove atop a small rise with tree's surrounding it on three sides. The scenery there is breathtaking. It is beautiful beyond words.

On the way to Bolestown, we passed Boatland. Boatland is mentioned in Mark Twain's Obedstown, which is based on Fentress County. Twain's father, John Clemens, who was circuit clerk of Jamestown and had a law practice there, also owned land at Boatland. He also owned land at Pall Mall, where he was the postmaster the operator or a general store. Twain (Samuel Clemens) was born after the family had migrated west to Missouri. Tinker Dave lived at Boatland, reportedly in the same exact area where Dave Crockett lived while on a hunting expedition during the winter of 1817.