The Cold Hard Facts Of Life

I recently discovered this piece of audio on side two of a reel-to-reel tape. It was recorded sometime during February of 1967.

The participants in the recording are Elmer Goodman, a well-known longtime disc jockey at WANY radio station in Albany, Kentucky, and a well-known musician, who performed at the Renfro Valley Barn Dance. The other participant in the recording is Ray Mullinix, the longtime owner and disc jockey at WKYR radio station in Burkesville, Kentucky, and who began his career with Elmer at WANY. Ray would also become a Kentucky State Representative.


Elmer: "And now here's R.G. Mullinix (aka Ray) and he's got his old steam-heated electric guitar around his neck and he's gonna pick one for ya. I don't know what it's gonna be, but I'm gonna let him tell ya what it is. R.G., what about it?"

(18-year-old Ray has been strumming an acoustic guitar as Elmer was speaking. He stops long enough to introduce the song...)

Ray: "It's Porter Wagoner's new one, The Cold Hard Facts Of Life."

(After Ray is finished singing, the dialogue continues with Elmer.)

"Oh that's a good job there, R.G., on that one. That's one of Porter's latest releases for RCA Victor and I happen to have that new album by Porter. It's called The Cold Hard Facts Of Life. It's got a picture of Porter coming through the door and there's his wife with another guy. He's got this satchel in his hand and a knife, it (the lyrics) says put away that knife, and you ought to see the looks on their faces, as the words of the song says. You done a fine job on that one, R.G., and I want to listen to that one back and see how it's gonna sound, okay."

The album cover photo, which Elmer eluded to, was shocking for its time, and would be anytime, but in spite of it, the LP was a big success. 'The Cold Hard Facts Of Life' was written by Bill Anderson.The song went as high as #2 on Billboard's country chart and stayed on the chart for several weeks.

By the way, I agree with Elmer that Ray did a 'good job on that one.' 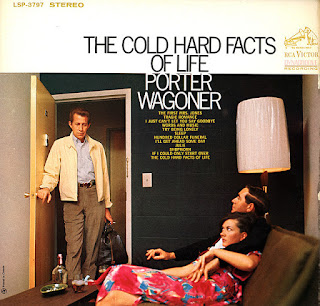