Laying Sid to rest yesterday was one of the hardest things I have ever had to do, but the service was exceptionally great, especially the words of Sid the Kid and Courtney. Loved it. Sid's death is the end of an era for me. He was the last of a group of a group of broadcasters I grew up with at WANY radio. It is an era that I did not want to see come to an end. Sid was such a huge part of my life and life is not going to ever be the same again. I am not looking for sympathy, but it has been a rough year, with the loss of my aunt Pat on June 3rd, followed a week later by the death of my sister. Sid was in the hospital during the entire month of July. He kept bouncing back, as he had done years before during a previous episode with sickness, but God's will is not always what we wish to happen. Sid came from Lillydale, Tennessee. His family were neighbors to my great grandfather Hige Boles and they were sharecroppers. Both families migrated to Clinton County when Dale Hollow Lake was created. Sid first met my dad during the middle school years and the rest is history. Both shared passions for basketball, baseball and music. But, Sid's biggest love out of those three things was basketball. He would stand on a crate and peer into the small window in the door and watch high school basketball games because he did not have enough money to pay the price of admission. Years later, he would become a local basketball legend. The great Kenneth Conner said not he but Sid was the greatest basketball player to ever play for Clinton County. He got into broadcasting, which led to him becoming the 'Voice of the Bulldogs.' There will never be another like him. For me, walking into Lindle Castle Gymnasium will never be the same. If I was not helping him broadcast the games, which I did for several years before he retired the first time, I was sitting beside he and Sid the Kid at court side. I was drawn to him and I loved him. Yesterday, the preacher said Sid is probably already trying to organize a basketball game in heaven. On the inside I had to laugh, because I knew that Sid's punchline to that statement would have been, "There are no basketball games in heaven, because there are no referee's in heaven." My first real memory of Sid is dad asking him to touch his nose to his chin (one of his early claimed of fame's). I thought, "What a freak!" It was wasn't too many years later that my opinion of him changed to, "What a man!" 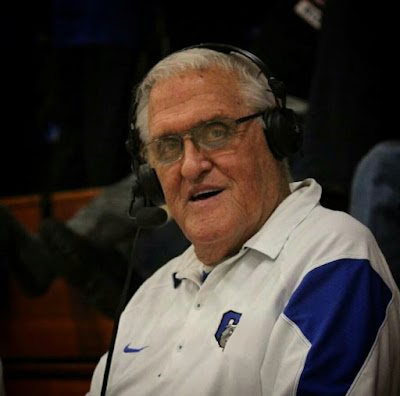