An RC And A Moon Pie 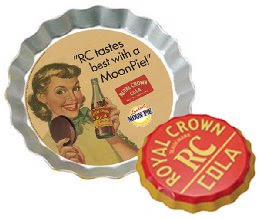 I couldn't wait to attend the old Clinton County High School. Growing up in radio, I was well aware of Lindle Castle and the mighty, mighty Bulldogs. I had seen them play many times there in the old gym, so I knew the tradition very well. That's just one of the reasons why I couldn't wait to attend school there. The other reason, which was actually the biggest reason, was because I knew high school students were allowed to leave school at lunchtime and walk over to Browns Dairy Treat, or 'Greasy Browns,' as it was informally called, and have lunch. That was THE life, and I wanted it! I wanted it bad. I wanted to be able to walk down the hall and have someone ask me what I had for lunch, and I wanted to be able to say, "Greasy Browns!" I knew that would be the ultimate cool thing. It was all I could do to have to wait for my 7th grade year to roll around when I would be a student there on that beloved ground - CCHS.

And, then one day in the fall of my 6th grade year, we were bussed over to the old gymnasium for an assembly. My heart sank when Superintendent Robert Polston told us the old high school would cease to exist after that current school year. My golden opportunity to be cool was lost! Gone forever! I couldn't believe my ears. I would never be able to go to 'Greasy Browns' for lunch during school. Life for me was over.

When my 7th grade year began at the "New" high school building, one of the first things I sought to learn was whether or not we would be able to leave school at lunchtime. The answer was NO!. I remember thinking communism might be more fun than this. Since it would not be allowed, I gave up all my previous thoughts and just ate lunch at the cafeteria every day. As I moved on into high school, I would hear other kids talk about leaving school and driving out to Smitty's for lunch, but, long abandoning my fantasy of being able to do that, I just never could get in the mood to do it. Besides, Smitty's was on the other side of town. Greasy Browns was right next door to the old high school. What a bummer! And, if I got caught going to Smitty's it would mean trouble from mom and dad, so I just gave up that idea and resigned to eating the cafeteria food.

But, then came that ONE day my senior year, when Mike Beaty asked me if I wanted to do lunch at Smitty's. I asked, "What if we get caught?" To which he replied, "So what?" "SO WHAT?" Well....yeah, SO WHAT! I'M A SENIOR!, I thought to myself. Mike suggested we find find Danny Thrasher and see if he wants to go with us. About that time, we both looked down the hall and there he stood, talking to some girls. About that time, someone came up to speak to Mike, so I walked down the hallway to see if Danny wanted to go with us. He said yes, and soon the three of us were on our way to eat lunch at Smitty's Drive-In Restaurant! Suddenly, my thoughts went back to those days when I thought it would be cool to leave school and each lunch, and even though we weren't going to 'Greasy Browns,' I didn't care. My heart was racing! Finally, my time had arrived.

Arriving at Smitty's, it was busy as usual, but after placing our order, we managed to find a booth. I remember I had a tuna fish on plain bread with lettuce, french fries and a coke, one of my most favorite things to order at Smitty's. We enjoyed our lunch then headed back to school. Cool as cucumbers, we were!

When we turned into the parking lot, there he stood -- Lindle Castle, hands on his hip (which was not a good sign if you knew coach), standing beside the basketball team bus. Oops! We had forgotten about the trip that Danny and I were supposed to take, along with the rest of the basketball team, to McCreary County for a basketball scrimmage. We found out later that we were seen leaving school. We'd been had. Coach Castle saw Mike Beaty's Mustang pull back into the parking lot and when he was sure we'd seen him, he boarded the bus and closed the door! I remember staring at the bus as it departed from the school grounds....leaving Danny and I behind. Boy, were we in trouble! It was nothing for Coach Castle to have you run 150 laps around the top of the gymnasium (or more!).

We sat in Beaty's car and watched the bus go out of sight and then got out of the car to walk back into the school building. As we got out of the car, out of the school walked principal Perry Hay. BUSTED! He told us to go into his office and wait, but he left out the what for part. We just knew we were going to get it good.

Now, you have to realize something. Hanging around Mike Beaty and Danny Thrasher was always a hoot and a half. There was never a dull moment. There was always laughter, and for sure, never a dull moment. Soon, it was no different even as we sat in principal Perry Hay's office waiting for him to come in and deliver our punishment. I think he wanted us to sit in there and squirm before coming in an delivering our punishment, whatever that would be. But, we weren't squirming. It was several minutes before Mr. Hay walked in to his office. In the meantime, Beaty, always the cool one, was reared back in Mr. Hay's chair with his feet propped up on Mr. Hay's desk!! Danny was stretched out on the couch and I was sitting there laughing at their wisecracks and thumbing thru magazines. Even though we knew trouble might lay ahead, there we were being our 'normal' selves.

Suddenly, without notice, Mr. Hay walked into the office. We all scrambled to sit straight up and try to be as serious as we could be. I looked down at the floor, because I knew if I eyed either one of those other two guys, I'd lose it, and so would they, probably. Mr. Hay began speaking in a very serious and straightforward manner as we sat there waiting for the boom to be lowered on us. He wanted to know where we had gone, and that's when it happened. It was Mike Beaty who mumbled that we had gone to get lunch. Mr. Hay said, "Where'd you go...to Harvey's to get a coke and a pack of nabs?" Beaty replied, "No sir, an RC and a moonpie!" It was one of those moments where, no matter how hard you try to be serious, no matter how serious the moment may be, something is said and there is no way you can keep from bursting out. To put it bluntly, we could not contain ourselves. We lost it....right in front of the principal. I laid back in my chair laughing hysterically. I remember Danny Thrasher fell back on the couch cackling out loud, and Beaty, well he had that "I-just-said-something-cool" laugh going on. I'll never forget it. You could tell Mr. Hay wanted to laugh with us, but he just said, "You boys get on out of here!" We took off as fast as we could and we laughed all the way down the hall back to wherever we were going. It's one of those things from my school days that is like frozen in time, and something that I shall never forget.

The next day, Danny and I ran, and ran, and ran - 150 laps up and down the steps, round and round the gym until I thought my legs were going to fall off.