Tinker Dave Beaty "...He did not choose the war so much as the war came to him." 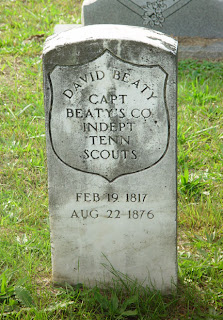 During the civil
war, Tinker Dave
Beaty was a
man of peace
who proved
to be a
worthy adversary
at war. He did not
choose to be
in the war
so much as
the war
eventually
came to him.

“About ten or twelve days after the Mills Springs fight, several of Scott Bledoe’s men came to my house and told my wife to tell me I must take sides in the war or leave the country. They took some of my property, some saddles and other things belonging to me, when they left and as they were going down to cross the creek I fired on them, wounding one man and a horse. After this they kept running in on us every few weeks. I told my boys that before I would leave home or run away that I would fight them to Doomsday and if they killed me, let them kill me. So I took my sons and raised a company of men to fight them.”

Knowing every road and path in the county, it was almost impossible to catch him, and whenever an opportunity was presented, he pounced upon a party of Rebels or guerillas, cutting them to pieces, capturing arms, ammunition, and provisions for his scouts. Becoming the perfect terror to his enemies, there is no question that he was a guerrilla warfare expert of considerable ability.

Tinker Dave's Independent Scouts supported the union's cause but were never mustered into the regular service. They received no pay, no clothes, no camp equipage, rations, nor military stores if any kind. Major John Brents said they were of no expense to the government, yet rendered as valuable service as the same number of men anywhere.

Tinker Dave's sister, Matilda, married John Boles, Sr., my great-great-great-grandfather. Of course, he was a member of the independent scouts, as was his son, John Jr.

Another son, George Washington Boles, my great-great-grandfather (and my very own G.W.), officially joined the independent scouts on July 1, 1862. "Uncle George, as he was affectionately known in his latter years, was born in 1845, so that would have made him 17-years-old when he entered the service against the rebels. Two of George's fingers on his left hand were shot off during a skirmish with Confederate partisan ranger and guerilla fighter Champ Ferguson's men. George always claimed it was Champ himself that shot his fingers off, but several men, on both sides, were involved in that particular scuffle, so who's to say. George said he "always made the rebels run." He also was quoted as saying he can remember voting for Abraham Lincoln.

Tinker Dave testified against Champ Ferguson, who was captured just after the close of the civil war. He was tried in Nashville and, upon being found guilty, was ordered to be hung by the neck. Apparently because his side won, Tinker Dave was never prosecuted.