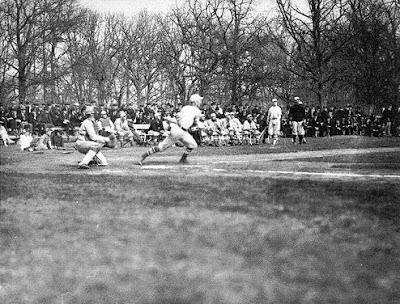 It was a Saturday, September 12, 1931. 400 people had gathered on the Conner farm on Indian Creek, just south of the Cumberland River, or in present-day terms, north of Grider Hill Dock, to watch a baseball game between Indian Creek and Creelsboro. Indian Creek was scheduled to play a black team from Burkesville, but the team had cancelled. So, the Creelsboro team was asked to play and the game was on.

At one point in the game, John Hugh (Monk) Oliver fouled the only ball they had to play with over in an adjoining field. While someone went to retrieve the ball, the shooting started. Down through the years, different stories have been told as to what happened, but here is the real story as told by three members of the Creelsboro team: Oliver (the batter), Carlos Mann (the third base coach), and Kermit Mann (who was on third base).

George Elmore was in the crowd on the third base side, near the backstop. While the foul ball was being retrieved, he came out of the crowd and started walking toward home plate. Constable Leo Mann, who was watching the game from just beyond the first base side, came onto the field and tried to arrest Elmore. Mann drew his gun, and the two men began to wrestle over it. As they moved toward first base, Elmore's buddy, Jasper Hadley, who had been watching the game from just beyond third base, came across the infield, drew his gun, and shot Leo Mann. He fired a second shot that accidentally struck Elmore. Over by first base, Bill Mann came running out of the crowd yelling at Hadley to stop. He drew a gun and shot at him, but the gun jammed. A second shot struck Hadley, but not before Hadley had fired at him, striking Bill Mann in the neck.

The entire episode lasted only one to two minutes. Four men who were related either by blood or marriage and who had grown up in the Creelsboro-Manntown area, were killed and only four, possibly five, shots had been fired. No one else, including the ballplayers, was involved.