It was the fall of the year when the call for volunteers went out at the outbreak of the War of 1812. There was no question that residents of Stocktons Valley, later known as Albany, would be first in line. They were, after all, veterans, or sons of veterans, who had fought the British in the American Revolution, and would eagerly take up arms to defend their country...once again.

In the latter part of July, Kentucky Governor Isaac Shelby issued a proclamation calling for 2,000 mounted riflemen to meet him at Newport within thirty days. The soldiers would march to Lake Erie to assist General William H. Harrison in a fight with British troops and their Indian allies, including the great Shawnee Chief, Tecumseh. On August 31st, Company 53, led by William Wood of Stocktons Valley, reached Newport, and the company's 47 men, including 36 rank and file, 11 commissioned officers and nine rifles, prepared for battle.

As we celebrate Veterans Day 2009, remember the many who fought - those who returned, and those who did not. 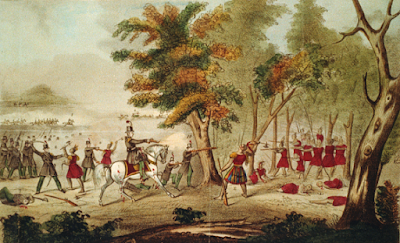 * This story was originally written in July of 2008 by The Notorious Meddler as Soldiers of Stocktons Valley.