A Reason For Giving Thanks 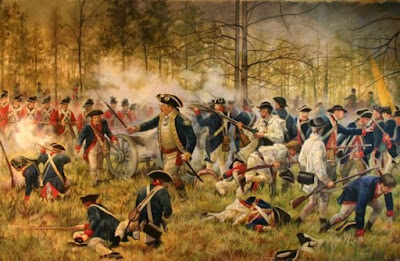 I really have a lot to be thankful for. Consider my ancestor, Jacob Speck. Jacob was my 6th great-grandfather. His family overcame a lot just to get to America, where they could enjoy freedom. He played an ultimate role in why am able to enjoy freedom in America in 2009.

Things had turned to the good for Jacob here in the 'land of opportunity.' He had a beautiful young family, including three young children, and no doubt so many hopes and dreams. No doubt, he was thankful for how God was blessing him here in America. His heart had to be overflowing with joy!

Soon after his birth around 1754, Jacob's family came to America aboard the Friendship vessel and lived in Philadelphia. When he was 21-years-old, Jacob married Christine Keefer. Soon after the birth of their second son, Jacob and Christina moved to North Carolina, where they settled at Stokes County, near present-day Danbury.

During the American Revolutionary War, almost every able-bodied man, who was not a part of the Continental Army, joined their local Militia to help protect the settlement in which they lived. At times, these militia troops were also called upon to fight in battles of the revolution. Thus was the case for Jacob Speck. On July 21, 1780, General Horatio Gates was at Camden, South Carolina commanding a force of 3,200 troops. He was joined by the North Carolina Militia, which included Jacob Speck. The British general, Lord Charles Cornwalis, was also at Camden with an army of 2,100. Even though Gates had Cornwalis outnumbered, most of the Americans lacked experience and training. The North Carlina Militia had never been tried. Plus, Gates' army was running out of supplies and many of the troops were not well-rested or fed. Gates was advised NOT to go into battle under the circumstances. But, he ignored the warning.

Just before dawn on August 16th, Gates and Cornwalis found themselves facing each other across a field. The British troops opened the battle as the right flank fired volley's into the militia regiments, causing a significant number of casualties. When the remaining militia looked up, they saw British troops advancing toward them with their bayonets drawn. This tactic had never been used before. The shock of seeing that, added with the fact that the militia realized they did not have bayonets, caused panic to spread quickly and the militia fled before the British regiments reached them. Within a matter of minutes, the whole rebel left wing had evaporated.

What must have been on Jacob's mind that morning as he stood in that field? No doubt he was thinking about Catherine. She was only 16-years-old when they married just five years earlier. Jacob Jr. was now four. Michael had just turned two, and a third son, George, my 6th great-grandfather, was less than two months old.

What must have been on Catherine's mind as she watched her husband leave home to defend their new settlement? It is even harder to imagine what she must have felt afterward. For you see...Jacob did not have a chance to run as did most of his fellow soldiers. In that predawn hour on that warm August 16, 1780 morning, when the smoke and dust from the cannon volley's had finally cleared, Jacob lay dead on the battlefield.

Jacob Speck's story is a sad one, but it reminds me that God never closes one door but that He doesn't open another one, and He always knows what He is doing. Before his death, God allowed Jacob to plant the seed that eventually brought ME into this world. Then, He blessed Jacob by allowing him to see his new son George, my descendant, before he left this world. Surely, before he left home to do battle, Jacob must have looked at his newborn son and thought about George's future...a future that includes me. God is good and this Thanksgiving Day, I really do have a lot to be thankful for.

I know His promise never faileth
The Word He speaks, it cannot die
Though cruel death my flesh assaileth
Yet I shall see Him by and by

The Battle of Camden, South Carolina.

You can read more about Jacob Speck by clicking here.