War on the Homefront

According to Confederate General Felix Zollicoffer, around September 23, 1861, a Federal force of about 400 men, which had made prisoners of Confederate soldiers and citizens sympathizing with the cause of secession, at or near Albany, was about this time routed by a detachment of Confederate troops under Captain Bledsoe and about 60 muskets were captured.

Less than a week later, the Confederates left Albany and camped about 20 miles away, taking much private and public property, incuding more than 30 home-guard muskets and 3,000 rounds of cartridges. In the presence of a foe outnumbering them ten to one, the Russell home-guards occupied the place, replanting and standing by the colors and defiantly inviting an attack. About 300 Federals, of the 12th Ky. infantry under Col. Haskins, arrived on the 28th and were soon reinforced by 500 to 600 cavalry and home-guards. On the 29th, Haskins ordered Capt. Morrison to attack a new Confederate camp at Travisville, 13 miles distant. About 100 troops were surprised there, 2 were killed, 2 taken prisoners and the others escaped. Maj. Brents, with 45 men, was sent to reinforce Morrison, but arrived too late to participate in the attack.

The "Affair at Travisville," as it has become known, was the first military combat incident of the Civil War in Tennessee. It happened not far from where I live.

From the Tennessee Civil War Sourcebook....

Sir:
This morning I received information that the Confederate forces were forming another encampment at Travisville, distant from us 13 miles. Accordingly I ordered Capt. Morrison to take the effective force under his command and proceed to that point, and after reconnoitering sufficiently to satisfy himself that the number was not too great to justify an attack, to take them by surprise, order a surrender, which, should they refuse, to fire upon them. In obedience to my orders he proceeded to that point as directed. In about two hours after Capt. Morrison left camp Lieut. Adams joined us, as also the Home Guards of Hustonville Cavalry. I ordered a detail of 15 men from the company under command of Lieut. Adams and 30 from the Hustonville Home Guards, which were placed under command of Maj. Brunets, and he ordered to proceed to Travisville, to support Capt. Morrison in the event he was repulsed; but before reaching that point Capt. Morrison had surprised the camp, finding about 100 troops, which, being ordered to surrender, fled, when they were fired upon and 4 killed, the balance effecting their escape by fleeing to the hills. They also took 4prisoners, 2 of whom, as also 2 horses, were captured by Thomas Huddleston, a private in Capt. Morrison's company; after accomplishing which, to use his own expression, "He looked for more, but they had all fled." Among the officers with Capt. Morrison were Lieut. Miller, Sergeants Hay, Carr, Chilton, Smith, and Howard. The prisoners were brought this side the line, when, after taking a solemn obligation to prove faithful to the United States Government, they were released. But for our timely arrival the Confederate troops, I have no doubt, would now have been in possession of this place, as they were to move in this direction on yesterday.

However, the Confederates did not stay dispersed for long as the following letter dated Oct. 1, 1861 from W.A. Hoskins at the camp at Albany to Brig.-Gen. Thomas indicates:

Sir,
I learn that the Confederate troops are rallying again at Travisville, with the intention of attacking us. From the best information, they cannot muster a force exceeding 1,150. Last night at 9 o'clock our picket guards were fired upon by a party of seven persons within 3 miles of the camp; they returned the fire, with what effect I have not ascertained. None of ours were injured that I know of, though one of the picket has not yet come up. I have ordered a detachment of fifty cavalry to scout the whole country in the neighborhood of the beat at which the pickets were stationed, as also that in which the absent picket was stationed.

Gen.:
I learn that they have also a body of cavalry stationed at Travisville, numbering 1,200, which of course will join their main force at Albany, making in the aggregate 4,400. I have no fears from an attack should it come from the direction of the main road leading from Monticello, but apprehend that they may attempt to flank us by crossing lower down the river. 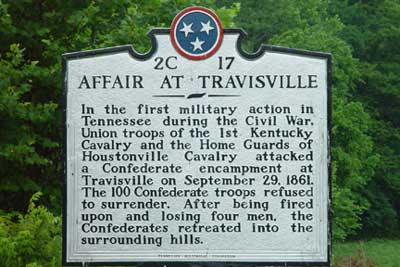 A sesquicentennial commemoration of the Affair at Travisville is planned for September 2011.