The Roots of the Sexiest Man Began Here

People Magazine announced Wednesday that actor Johnny Depp is the sexiest man on the planet. According to the magazine, the 46-year-old Depp headed a list of 15, catching People's attention not so much for his swashbuckling antics in the "Pirates of the Caribbean" movies, or his freakish charm in "Edward Scissorhands," but his softer side as a family man. "The star has had women swooning since his days as a teen detective on 21 Jump Street, yet it's his devotion to his family that really makes the actor so endearing," People gushed. Depp also won the magazine's "Sexiest" honor in 2003. Depp's companion is French singer Vanessa Paradis and he is the father of Lily-Rose,10, and Jack, seven.

And, did you know that Isaac Tipton's daughter-in-law was Eleanor Means, Johnny Depp's great-great-great-aunt, whose nephew, William Ezra Means, was my great-grandfather?

Maribu left here and moved to Eighty Eight to live with her husband, John B. Depp. Their son, Oren, migrated to Owensboro, where John Christopher Depp (Johnny Depp) was born many years later. 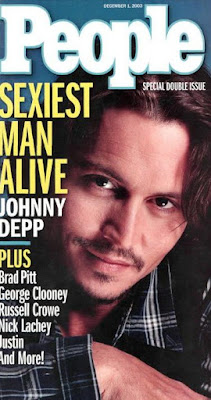