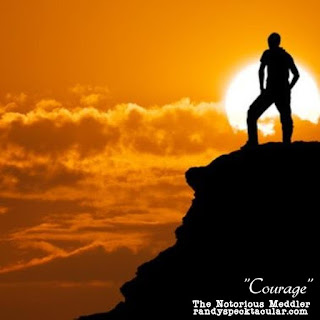 I watched "The Help" last night. It is a great movie on many levels. The film stars Viola Davis, Emma Stone, Octavia Spencer, Bryce Dallas Howard, Jessica Chastain and many others. It is a story about one white woman's (Skeeter Phelan's) relationship with two black maids, Aibileen Clark and Minny Jackson, during the Civil Rights era in 1963 Jackson, Mississippi. Skeeter is a journalist who decides to write a book from the point of view of the maids (referred to as "the help"), exposing the racism they are faced with as they work for white families. It took a lot of courage to write the book, and it took even more courage for the maids to talk about:

A quote near the end really took me back. It was from the mother of the writer, who, when discovering her daughter is writing this book, says “Courage sometimes skips a generation.” She was speaking to her own lack of courage and not standing up to her peers.

Is it true? Does courage sometime skip a generation? Naturally, it is not true with everyone. It is a person to person issue. Many people do courageous things every day.

Where does courage come from? Someone said it comes from being exposed to a remarkable act that you personally witness. Take 'The Greatest Generation' for instance. Was that age of Americans, our great grandparents, more courageous than we are? Journalist Tom Brokaw coined the term, "The Greatest Generation," in a book he wrote to describe the generation who grew up in the United States during the Great Depression, and then went on to fight in World War II, or supported it on the home front. Brokaw wrote, "It is, I believe, the greatest generation any society has ever produced." He said the men and women fought not for fame and recognition, but because it was the "right thing to do."

In America today, more so lately, we have been hit with a deluge of issues that should have brought us to our feet, but, except for the occasional emotional spark, nothing like that has happened yet, except for the less than five percent group, who seems to be organized and getting everything their way.

Someone needs to step up and soon, but who, and when? In 1957, President John F. Kennedy authored a Pulitzer Prize-winning book, "Profiles in Courage." In it he said...

"In whatever area in life one may meet the challenges of courage, whatever may be the sacrifices he faces if he follows his conscience - the loss of his friends, his fortune, his contentment, even the esteem of his fellow men - each man must decide for himself the course he will follow. The stories of past courage can define that ingredient - they can teach, they can offer hope, they can provide inspiration. But they cannot supply courage itself. For this each man must look into his own soul."

Corrie ten Boom, who, along with her father and other family members, helped many Jews escape the Nazi Holocaust during World War II, wrote:

"If a bird is flying for pleasure, it flies with the wind; but if it meets danger, it turns and faces the wind in order that it may fly higher."

The characters in the movie faced head on what frightened them most (prejudice, disrespect, abuse, rejection) and did not retreat, even though they were scared. It took a lot of courage.

Courage to change begins with a whisper. It begins in a person’s heart and mind, then it works itself outward to change a life, a relationship, a community, even a system, empowering everyone around them to do the same.