The Steps of a Good Man

"He hath shewed thee, O man, what is good; and what doth the LORD require of thee, but to do justly, and to love mercy, and to walk humbly with thy God?' (Micah 6:8)

Often, I visit the graves of two of Clinton County's finest men, Harlin Dyer and Oren Reneau. I was only five years old when they died, but their story, especially the ending, touches my heart and has always had an effect on me, so much so that I have never been able to get away from it. I will visit their graves, Oren's for example, and I will stand there and take a photo of his grave marker. It's the same as the photo I took the time before that, and the time before that, and before that, and before that. I am not sure why really, but I am drawn to their story and what took place at the end of their lives. Maybe it is the writer in me that always brings my thoughts back to these two men.

Both were alike in many ways. Both had been successful in business. Both had been looked up to and greatly admired. They were great public servants and leaders in the community and in church. Their faiths were strong. They shared the same morals of God, family and country, and they were friends.

Harlin Dyer did many things during his life; state representative, bank cashier, insurance and real estate businesses. Born on October 21, 1879, Harlin lived life to the fullest and literally gave away all he had before passing on. He served God, his church, and his family with a love undescribable, according to his grandson, Pat.

Born on November 28, 1895, Oren Reneau was the son of legendary preacher, Isaac Tipton Reneau. He started out to serve in the U.S. Army on February 22, 1918, but a broken left elbow during training led to a medical discharge on December 4th that same year. Oren graduated from the Louisville College of Pharmacy in 1923 and eventually started Reneau's Drug Store in Albany.

We don't know what tomorrow will bring. Only God knows how long our days are. James 4:14 says life is but a vapor that appears for a little time, and then vanishes away. When Harlan died on July 13, 1965, Oren served as one of the pallbearers at his funeral. As they were rolling the casket out the door of the Methodist Church in town, Oren remarked out loud, "I wonder who the next one will be?" The shocking reality was that one week later, on July 22, 1965, it was him.

Psalms 37:23 says the steps of a good man are ordered by the Lord. Without question, Harlin Dyer and Oren Reneau were good men. 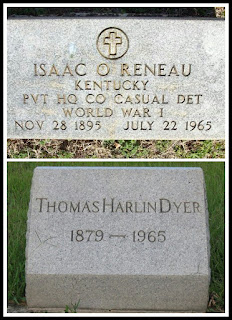