On July 21, 1926 the Wayne County Outlook wrote, "Bro. Alvin Bertram of Albany died at the home of his son, Senator Elza Bertram, on North Main Street in Monticello last Wednesday afternoon after a short illness. Bro. Bertram had stopped by his sons home on his way to visit his daughter, Lena Denney, in Spiceland, Indiana, but became sick and only lived a few days. His children and their families accompanied the body back to Albany for his funeral and burial."

His tombstone at Albany Cemetery says he was a Baptist preacher for 54 years. "Few assocations can put forth a more faithful record than the one made by Bro. Bertram," wrote the newspaper. He had been a member of the Stockton Valley Assocation for fifty-seven years and had just recently been re-elected moderator for the twenty-sixth time.

Bro. Bertram was the fourth official pastor in 123 years at Clear Fork Baptist Church. Isaac Denton, the first pastor, served 46 years, 1802 to 1848, Daniel Hancock and James Abston then shared the pulpit until 1852, when Abston agreed to be the full-time pastor for the next two years. Isaac Denton's son, Joseph, served as pastor church for the next 32 years, from 1854 until 1886.

Following his death, Bro. Bertram, who had been ordained to preach in 1872, was elected Pastor and served from November 1887 until April 1889. He was elected pastor again in November of 1889 and this time remained in the pulpit for the next 36 years, preaching his last regular sermon on July 24, 1924. Upon his death, he had served as pastor for a little over thirty eight years.

Preaching the gospel ran in the Bertram family. Alvin's grandfather, William, was a Baptist preacher. So was Alvin's father, Jonathan. Alvin did more than preach. From 1893 to 1902 he served in the Kentucky legislature as State Representative of Clinton and Wayne counties.

Alvin was born at Sunnybrook in Wayne County on Aug. 22, 1846. He married Rosa Young of Clinton County in 1864 and lived in Albany the remainder of his life. Rosa died in 1919. Besides his daughter in Indiana, he was survived by five sons, Printis of Albany, William of Cartwright and Elza, Oscar and Joe, all of Monticello.

Like his father, grandfather and great-grandfather, Printis also became a preacher. As a matter of fact, he served as Clear Fork's tenth pastor, from May 1932 to May 1933. Elza and Oscar practiced law in Albany for nearly 25 years as Bertram & Bertram before moving the practice to Monticello. Elza was elected to the Kentucky State Senate in 1910, and in 1933 became a Judge with the Kentucky Court of Appeals. 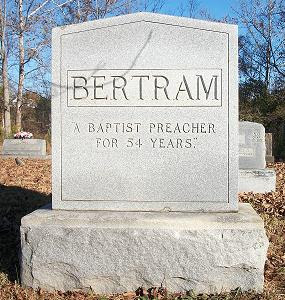