On a Hill Far Away Stood an Old Rugged Cross 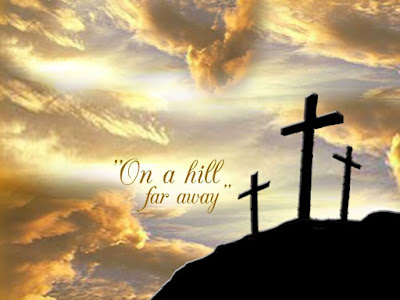 Evangelist George Bennard wrote the first verse to "The Old Rugged Cross" after being heckled by several youth at a revival meeting in Albion, Michigan in the fall of 1912. Troubled by their disregard for the gospel, he was reflecting on the work of Christ on the cross when he wrote,

"On a hill far away stood an old rugged cross, the emblem of suffering and shame."

He finished the hymn during a revival in Sturgeon Bay, Wisconsin that began in late December that year. The song was popularized in Billy Sunday's evangelistic campaigns by singers Homer Rodeheaver and Virginia Asher. They were the first to record it in 1921.

Now, more than ever, we need to cling to the cross. We haven't been living in the world the Lord intended for us to live in. So, now that He has gotten our attention, we need to change. Pray for change, pray for each other. Instead of putting down our leaders, pray for them, and yes, even the President. After this pandemic is over, if we go back to the way things were we will have lost the lesson. We must rise up and do better. I can't think of a better place to start than by clinging to the old rugged cross.