Rainbow Valley Will Never Be The Same

Lester Moran & his Cadillac Cowboys spent their entire career performing each and every Saturday night at the Johnny Mack Brown High School there at Rainbow Valley. That's the same dance that use to be held in the Volunteer Fire Hall before it burnt down.

"The Old Roadhog," along with Red and Wesley, the two young country singers, and ol' Wichita, Roadhogs right hand man, kept a strain of country music alive in the valley long after most people thought it had died, or should have died.

We thought the invention of the guitar tuner might kill off Lester's style of music, but unfortunately, I mean fortunately, tuners never made it into the culturally isolated Rainbow Valley, and when his record company tried to buy him one he rejected it, saying only "I never did like seafood much."

For years, Lester and the boys did a radio show on WEAK radio, where they spent fifteen minutes playing good ol' country music. They also did a lot of pickin' and grinnin' for some of their good friends over in Hogan County at Moose Lodge #13.

Ain't nobody gonna miss Old Roadhog more than his good friend Burford down at Burford's Barber Shop, that's B-u-r-f-o-r-d, and also Ernie at Ernie's Egg Mart, where you can always get cracked eggs half price at 8pm. That was a yoke!

We asked Old Roadhog of he'd like to say something and after he'd pulled his self together he said, "It is better to have loved and lost than never to have lost at all.” So long until next time Old Roadhog, Lester Moran. Take it away Wichita!

RIP Harold Reid of the Statler Brothers. The class of '57 had its dreams. You changed the world and made it a better place to live. 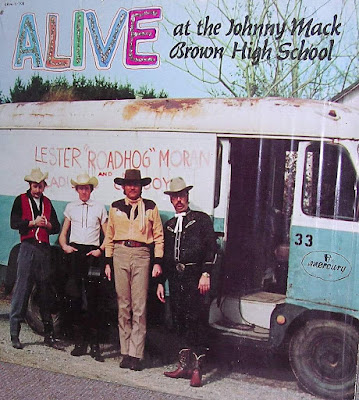