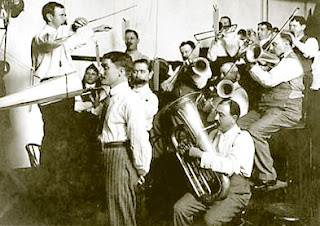 Tenor John Young, also known as Harry Anthony, recording a cylinder in the early 1900s, showing the cramped conditions and other concessions necessitated by the acoustic recording process at the Edison recording studio. Eugene Jaudas is conducting the studio orchestra. Using the name, Harry Anthony, Young had numerous recordings of hymns with partner Frederick J. Wheeler that reportedly led comedian Billy Murray to dub them the 'Come-To-Jesus Twins.'


To listen to recordings by John Young, or other early recording artists, visit the Cylinder Preservation and Digitization Project at the University of California at Santa Barbara.
at July 28, 2012