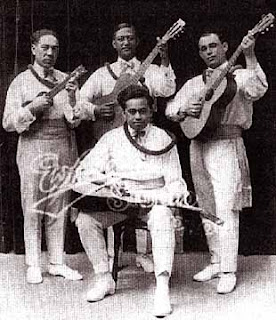 Ford Hawaiians Henry Kailimai, was a virtuoso ukelele player and composer who came from Hawaii in 1915 to perform at the Pan Pacific International Exposition in San Francisco. The performances by him and other Hawaiian musicians exposed the public to Hawaiian music for the first time, fueling the exploding popularity of Hawaiian music on the mainland. Attending the exposition was Henry Ford, and he was so impressed with Henry Kailimai that he persuaded him and four other Hawaiian musicians to move to Detroit, Michigan to be artists in residence for the Ford Motor Company. Because of Henry Ford’s friendship with Thomas Edison, the group traveled to New York and made several recordings at The Edison Recording Studio, using Edison’s new phonograph invention, which he was perfecting at the time. Kailimai was a professional pianist by night, and an engineer by day. His career was curtailed due to the wishes of his wife, who didn’t want him to go on the road.

To listen to recordings of Ford Hawaiians, or other early recording artists, visit the Cylinder Preservation and Digitization Project at the University of California at Santa Barbara.
at July 27, 2012