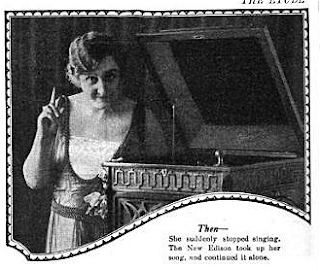 From an advertisement in October 1920 The Etude, Pressers Musical Magazine:

Miss Shepherd, who is a famous concert soprano, stood beside the new Edison and started to sing. “In the gloaming, oh! My darling…..” With a soft, rounded loveliness, the melody filled the auditorium. Pulsing through its theme was the soul of a great artist. It’s message, warm with understanding, reached the hearts of the hushed listeners and sped their imaginations back to cherished memories.

It was the magic of music.


Suddenly, Miss Shepherd’s lips went absolutely still. But, her lovely voice went smoothly on, ….it was best to leave you, thus.

This test, on April 26, 1920 in Dallas, Texas, was the 185th test given by Betsy Lane Shepherd in 185 cities and towns of the United States and Canada. The 185 audiences aggregated more than a hundred thousand people. Each audience found itself absolutely unable to tell when Miss Shepherd was singing and when the new Edison was re-creating her voice, except by watching her lips. According to the advertisement, it was a most phenomenal achievement. No other phonograph or talking machine manufacturer dares to make this comparison, the ad read. Mr. Edison subjected the new Edison to these tests because he wanted to prove that perfect realism was an everyday performance with the new Edison.

To listen to recordings of Betsy Lane Shepherd, and other early recording artists, visit the Cylinder Preservation and Digitization Project at the University of California at Santa Barbara.