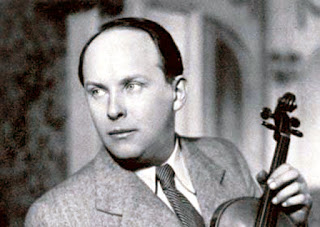 Váša Příhoda, born August 22, 1900, was a famous Czech violinist known for the perfection of his technique and the beauty of his tone. He was considered a Paganini specialist, and his recording of the Violin Concerto in A minor by Dvorak is still very highly praised. His artistry was controversial, and tended to polarise listeners. His first public performance was at age 13. At age 19 a tour of Italy proved unsuccessful; poverty-stricken, he joined the orchestra of the Café Grand’Italia in Milan to earn money. There he was heard by chance by Arturo Toscanini, who arranged a benefit concert for him. He then resumed his Italian tour, this time to great success. He was said to have been given Niccolo Paganini's own violin on which to play. He toured Brazil and the United States in 1920 and the USA again in 1921. He once shared the stage of the Royal Albert Hall with Pablo Casals. Příhoda concertized extensively all over the world and made a number of recordings when the industry was in its infancy. Unfortunately, some of his recordings were not well-produced so the sound quality is poor. But, he was greatly admired for his style, dazzling technique, and finesse. He appeared in two films in 1936: Between Two Worlds and Die Liebe des Maharadscha. During World War II, he taught at the Mozarteum in Salzburg. Because he continued to perform in Germany and German-occupied territories after the Nazi invasion of Czechoslovakia, he was briefly charged with collaboration after the war, and censured by the Czech government. He later taught at the Academy of Music and Dramatic Arts in Vienna. In later years, he dedicated most of his time to teaching and composing small chamber works. His last concert was in April 1960. He died on July 26, 1960.

To listen to recordings made by Vasa Prihoda, or other early recording artists, visit the Cylinder Preservation and Digitization Project at the University of California at Santa Barbara.
at July 27, 2012