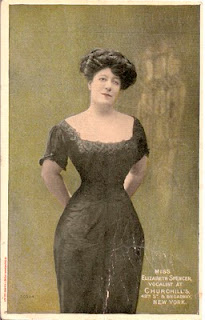 Elizabeth Spencer was an American singer during the later 19th century and early 20th century. She is primarily remembered as a recording artist for Thomas Edision. She made numerous recordings for Edison Standard Records from 1888 until 1912. Her voice is noted for its sterling operatic quality combined with ability to sing in the vernacular. Spencer died in 1935.

To hear recordings made by Elizabeth Spencer, or other early recording artists, visit the Cylinder Preservation and Digitization Project at the University of California Santa Barbara.
at July 27, 2012