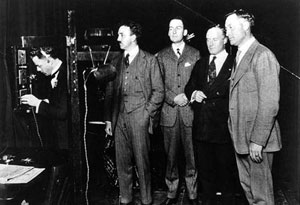 Lyric Male Quartet. Victor's popular Shannon Four, which began recording in mid-1917 and consisted of Charles Hart, Harvey Hindermyer, Elliott Shaw, and Wilfred Glenn. The first Shannon Four disc was issued in September 1917: "I May Be Gone For A Long, Long Time," followed in October by "Wake Up, Virginia." Some discs were credited to "Charles Hart and the Shannon Four," such as two titles issued in May 1918: "A Little Bit of Sunshine" and "The Last Long Mile." The quartet also recorded for Edison Records, sometimes being called Lyric Male Quartet.

To listen to recordings by the Lyric Male Quartet (Shannon Four), or other early recording artists, visit the Cylinder Preservation and Digitization Project at the University of California at Santa Barbara.
at July 27, 2012