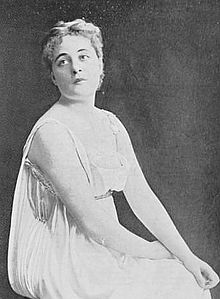 Sibyl Sanderson was a famous American operatic soprano during the Parisian Belle Epoque. She was born on December 7, 1864 in Sacramento, California. Her father, Silas Sanderson, was once Chief Justice of the Supreme Court of California. After his death in 1886, Sibyl and her mother moved to Paris and became transplanted socialites. Sanderson proved to be a remarkably gifted singer and began to appear on stage. She was Jules Massenet's favorite soprano and appeared in the premieres of a number of his operas. Sanderson was also admired by Camille Saint-Saens, who wrote the title role in Phryne' for her. Success outside of Paris was elusive for Sanderson; she appeared at Covent Garden and the Metropolitan Opera (debut in title role of Manon on January 16, 1895, the last performance as Juliette in Romeo et Juliette on December 31, 1901) to lackluster reviews. In 1896 she married a Cuban millionaire and sugar heir, Antonio Terry, after which she temporarily halted her operatic activity, making an unsuccessful comeback two years later. Her last years were marred by depression, alcoholism and illness and she died from pneumonia on May 16, 1903 at the age of 38.

To listen to recordings by Sibyl Sanderson, or other early recording artists, visit the Cylinder Preservation and Digitization Project at the University of California and Santa Barbara.